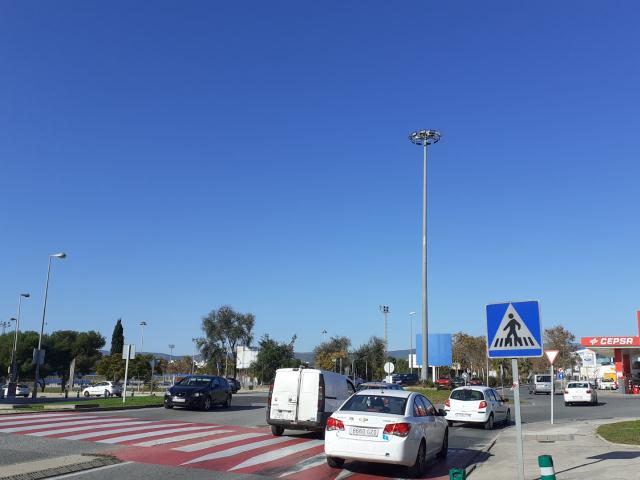 The roundabout between Ronda Ibérica and Ronda Europa is the point where 24 traffic sensors have been installed that measure the number of vehicles and the type (cars, motorcycles or trucks) that enter and leave the city at this point. . The public agency for Innovation, Neàpolis and the local company Urbionix, have launched this project within the line of promoting sensorization to collect data and improve the efficiency of services and the quality of life of citizens.

The counting system works with very sophisticated sensors capable of collecting data in real time, anonymously. They are placed 25 meters high and constantly analyze the vehicles at the roundabout, both day and night. Every 5 minutes the system sends the traffic count of the four entrances and exits to the Sentilo database, of the Diputació de Barcelona.

The Councilor for Innovation, Conxi Martínez, highlights the public-private partnership that has made this initiative possible, with a company based in Neàpolis. The project is part of the actions to implement the Internet of Things (IoT), which is already being carried out on other issues such as weather data, environmental data in schools, efficiency in water consumption, light, in public buildings and in energy poverty.

Conxi Martínez considers that technology “must be at the service of the people. As an administration we must support these technologies that, in times of pandemic, have become present technologies, as a city we have made a commitment to make better services to the citizenry “ .

The data obtained from traffic sensors must make it possible to make decisions that improve environmental conditions, reduce consumption, improve public transport and better manage services, among others. “This data as an administration allows us to make decisions, they allow us to be more effective,” says the councilor.

The development of new technologies in times of pandemic has been a key element for the Councilor for Innovation, “We have detected a lot that companies in this more technological field have experienced accelerations and here is the role we have as an administration, from Neàpolis, the public innovation agency, to invest so that all this business fabric grows and develops “.

Apart from the sensing projects, Conxi Martínez recalls other initiatives such as the digitization of sectors such as restaurants and municipal markets through the Vilanova App, which allows you to get in touch with establishments and place orders from your mobile phone.

With the installation of the sensors in the roundabout, it has been used to change the luminaire for LEDs, which make more light, is white, and consumes less than half of the previous one, which was pumpkin-colored.