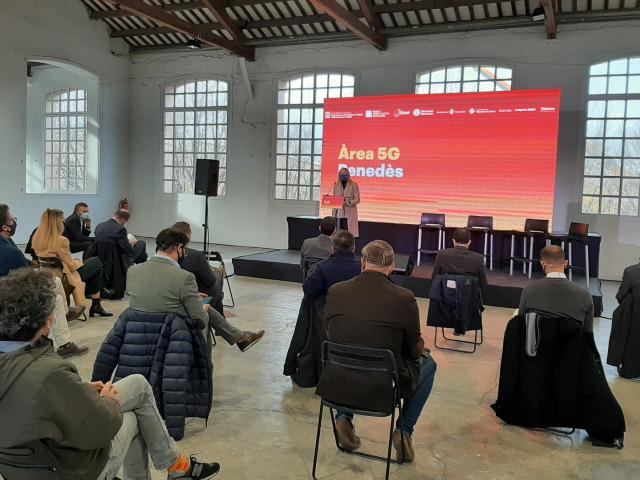 Vilanova i la Geltrú has participated this morning in the presentation of the 5G Penedès Area, promoted by the Generalitat de Catalunya, through the Department of Digital Policies and Public Administration, and framed within the 5G Strategy of Catalonia . It is a project that has the involvement of Mobile World Capital Barcelona, the i2CAT Foundation, the Barcelona Provincial Council, Igualada City Council, Vilanova i la Geltrú City Council, TICAnoia, Neàpolis and Telefónica.

In the initial phase, the Penedès 5G Area will have coverage areas in Vilanova i la Geltrú and Igualada, where the presentation took place today, taking advantage of the commercial deployment planned by Telefónica. However, the project includes the whole of the vegueria, which covers the counties of Anoia, Alt Penedès, Baix Penedès and Garraf.

On behalf of Vilanova i la Geltrú City Council, the event was attended by the Councilor for Innovation, Conxi Martínez, who described the “5G revolution” as “a great opportunity” for the generation of new professions within the digital sector. The Vilanova councilor emphasized the importance of technological advances such as 5G “in the process of innovating our cities and our territory” , and that they will be essential in the development of “the so-called Industry 4.0” . In this regard, the director of Neàpolis , Joan Carles Lluch, spoke about local projects that are working in immersive virtual reality, for example in the areas of dependency and tourism, which will benefit from the deployment of 5G.

The Penedès 5G Area is the fourth to be launched by the Generalitat within the 5G Strategy of Catalonia. The Minister of Digital Policies, Jordi Puigneró, explained the commitment made with the presentation of the project “to the European economic recovery funds NextGenerationEU, to promote the 5G Areas and the deployment of 5G in the territory with an amount of 25 million euros ” . The Minister said that 5G technology will open “a new digital age” , which will promote a wide range of job opportunities and job creation in the coming years, and in which the local world will play an important role. It is about “guaranteeing the right of the territory to innovate from the territory,” he said.

The objective of the Penedès 5G Area is based on the deployment of Telefónica’s commercial 5G network in order to promote training and dissemination, the holding of workshops, the use of a laboratory and the promotion of pilot projects. proof of concept about this technology. In the case of social and health care, there are already different projects in Garraf that can be promoted by the arrival of 5G, such as the Specialization and Territorial Competitiveness Projects (PECT), “Active and healthy aging and dependence” or the work done from the Institute of Robotics for Addiction (IRD). In this area, the 4D Health Innovation Simulation Center also stands out in Igualada.

In the field of media and entertainment, Vilanova i la Geltrú already has several initiatives: a degree in professional training in video games and virtual environments or the European project MedGaims, focused on virtual reality and gamification in tourist environments, as well. as a virtual reality laboratory, led by the i2CAT Foundation and under the umbrella of the public innovation agency Neàpolis, from where new holoconferencing systems are investigated. Added to the arrival of 5G, all of them can foster the retention of talent, as well as attract new digital professionals and generate the need for qualified ICT profiles.

Neapolis is a Public Innovation Agency for ICT, the multimedia sector, creativity and entrepreneurship . We offer a space for experimentation, incubation and growth for the city’s entrepreneurial community, while promoting innovation and collaboration.

MEDGAIMS – G&TE, the first gamification and tourism event in Catalonia

Do you know what CPS technology is? Want to know how it integrates with other technologies like RFIDs and IoT?

Neapolis, partner of the Digital Cluster of Catalonia